In late 2017, I went to an Intelligence Squared debate in Sydney, Australia. The subject of the debate was whether “humanity is designing its own demise”. It was focused on the concept of jobs in the age of Industry 4.0. The main arguments I heard against the motion were along the lines of “this happened before and we have always adapted”, “jobs will be lost but even more new jobs will be created” and “trust the free market”. In my opinion, these arguments are childish. Most commonly cited AI studies estimate that it could potentially replace between 9% and 47% of all jobs. It is quite naïve to hope that it will only be 9%, to hope for the best possible outcome. No matter what your individual base case scenario is, the tail risk of losing 47% of all jobs makes it critically important for us to establish safeguards and put in place frameworks that would ensure our prosperity and evolution as a society.

There are several arguments for why Industry 4.0 is unlike any of the previous three industrial revolutions.

Instead of reinventing the wheel, I would like to quote Klaus Schwab, Founder and Executive Chairman of the World Economic Forum.
“The speed of current breakthroughs has no historical precedent. When compared with previous industrial revolutions, the Fourth is evolving at an exponential rather than a linear pace.”

The third industrial revolution, for example, took place over the last 25-30 years even though some put the start date in late 1950s or 60s. By that measure, AI started at the same as Alan Turing’s paper titled “Intelligent Machinery” was published in 1948. Over the last 30 years, coinciding with the third industrial revolution, we have seen rising income inequality, falling wages, and deterioration of the middle class. According to the Economic Policy Institute, the top 10% of the income distribution has claimed almost two-thirds of the gains to overall incomes since 1979, with the top 1% alone claiming 38.7% of overall gains [1]. The Current Population Survey by the U.S. Census Bureau covering period from 1967 to 2014 shows that real household income for the bottom 50% of the population increased by 21%, while that number is 68% for the top 10% [2]. Our World In Data, a collaborative effort between researchers at Oxford and the non-profit organization Global Change Data Lab, presents the data and research on the UN’s Sustainable Development Goals (SDGs). Chart below, sourced from Piketty, Saez and Zucman (2016) [3] shows average annual income growth in the US over the period 1980-2014. As one can see, the most vulnerable people in the US have seen no real income growth for the last 35 years. What’s more, the pre-tax income growth has actually been negative for the bottom 25%. At the same time, the ultra-rich have enjoyed an average annual growth of about 6%. 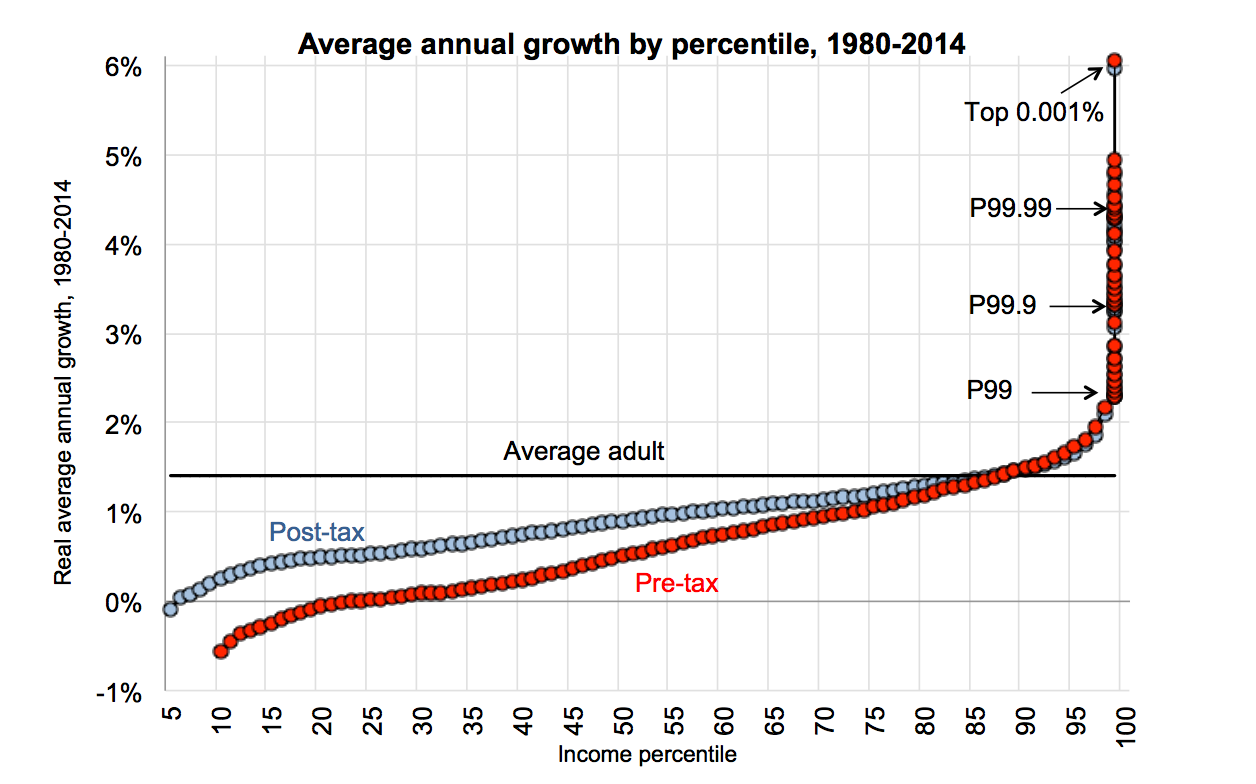 I do not want to dwell on the rising income and wealth inequality, rather to highlight the fact that the technological revolution has left quite a few people behind and created more of a winner-take-all economic environment. These trends will continue. Industry 4.0 will develop faster than the last wave of technological advancement. This will be aided by the funding ecosystem, lack of hardware required for adoption, economic cycles and the nature of AI and machine learning where data and processing power are the only necessary ingredients.

A much more rigorous funding ecosystem is likely to contribute to an ever-faster pace of AI development and implementation. This holds true for the US and, to a greater degree, China. Since 1990, the number of private equity firms has risen steadily. More broadly, private market assets under management totaled roughly $5.2 trillion in 2017, with managers accruing $1.8 trillion of dry powder yet to be allocated. This funding machine is now powering AI and machine learning startups to the rune of $9.3 billion in 2018, an increase of 72% over 2017. Interestingly, 48% of global AI startup funding came from China with the US contributing 38%. Chinese government is also targeting $70 billion of AI startup funding by 2020, in line with its “Made in China 2025” strategic plan. PWC, in its recent report, estimated that AI will add $15.7 trillion to the global economy by 2030 [4]. They forecast that the US will take home $3.7 trillion, while China will gain $7 trillion, combining to capture approximately 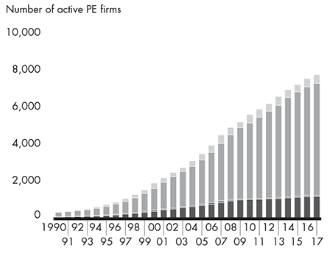 70% of the global AI-related growth. With AI’s significant economic and social potential, as well as availability of capital following expansive monetary stimulus of the last decade, it is my belief that the abundance of funding will facilitate a rapid development of AI companies and technologies. Development, which our policymakers and we as a society are not ready for.

While adoption of next-generation AI will require companies to have AI-specific hardware, AI software is currently more than enough to harvest the low-hanging fruit. McKinsey, in one of its Global Survey, defined AI as the ability of a machine to perform cognitive functions associated with human minds. The survey focused on these nine capabilities: natural-language text understanding, natural-language speech understanding, natural-language generation, virtual agents or conversational interfaces, computer vision, machine learning, physical robotics, autonomous vehicles, and robotic process automation (RPA). It found that nearly half of respondents embedded at least one of these capabilities and only 21% report embedding AI into multiple business units or functions [5]. At this stage, most businesses can create significant value by embedding AI capabilities and scaling software-based AI solutions.

Since 1999, we experienced two economic recessions while undergoing the third industrial revolution. Between 2000 and 2010 no net new jobs were created in the US economy. In a 2003 study, Erica L. Groshen and Simon Potter at the Federal Reserve Bank of New York concluded that most jobs added in post crisis recoveries are brand new jobs, not rehires. They attributed the slow pace of job growth to the fact that creating jobs takes longer than rehiring workers. Economic recessions allow companies to reset their businesses, often by making tough decisions like cutting headcount or making otherwise non-urgent investment in maximizing efficiencies.

In the 21st century, and more recently after the Great Recession, maximizing efficiencies meant investment in technology and automation. While new jobs were created, old jobs were not replaced. This process does create jobs but a lot of them are lower paying or part-time. It takes fewer highly skilled technologists to maintain efficiencies and reap benefits of automation. Not many have the necessary skill set for the new normal and are forced into less favorable arrangements or lose hope altogether. Participation rate dropped by 3.1% between 2007 and 2018, leaving roughly 17 million people behind. The chart below from Naema Ahmed at Axios using the data from the U.S. Bureau of Labor Statistics provides a visual summary of this dynamic. Since the crash, about 75% of new jobs have paid less than $50,000 a year, putting them just above the $45,000 annual middle-class threshold for a household. It is a fair argument, in my opinion, that these dynamics will repeat when the US economy eventually enters the next recession. The same McKinsey study cited previously found that “the most digitized companies have done more than others to automate human labor via AI”. The same respondents, however, expect the future impact of AI on headcount to be negligible or positive. I believe that these expectations are made assuming status quo, or trend level economic growth. Faced with a recession most businesses will speed up AI adoption and choose to reduce headcount. Similar to the dynamics following the Great Recession this process will create AI jobs but will leave yet more people behind or falling into the gig economy. 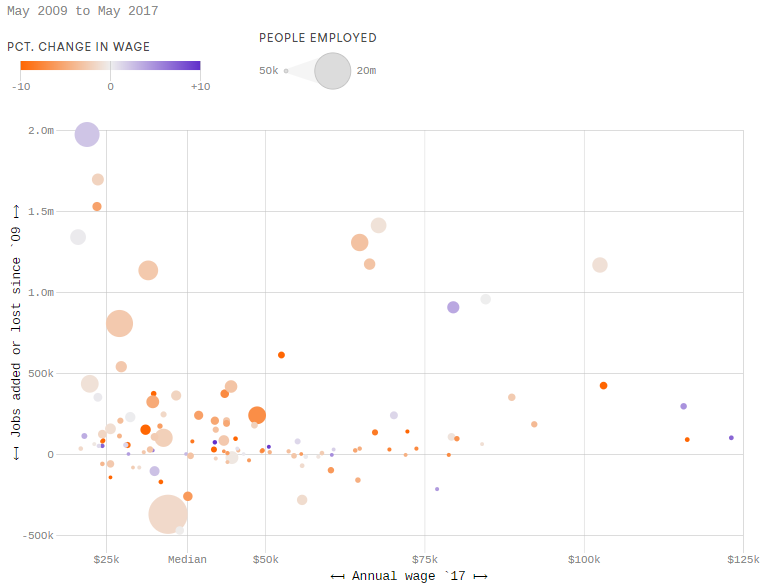 Per Axios, each bubble in the chart represents an occupation group as defined by the BLS. The horizontal position of the bubble is the median annual earnings, and the vertical position is the total change in number of jobs in the profession. The size of the bubble represents the total number employed, and color corresponds to change in inflation-adjusted annual earnings.

AI represents significant risks to the labor markets based on prior experiences and broader economic dynamics. Our social cohesion, or rather lack of it on every level, leaves us unprepared to deal with this issue. Solutions being currently proposed are limited in scope and, I believe, only attempt to fix the symptoms without addressing the underlying problems.

“Current systems of public policy and decision-making evolved alongside the Second Industrial Revolution, when decision-makers had time to study a specific issue and develop the necessary response or appropriate regulatory framework. Given the Fourth Industrial Revolution’s rapid pace of change and broad impacts, legislators and regulators are being challenged to an unprecedented degree and for the most part are proving unable to cope.” – Klaus Schwab, Founder and Executive Chairman of the World Economic Forum